For the past ten days or so I've been saying I've been on the wrong swingers, which is always the case after a good run it tends to swing around, but anyway try this..

I lay 1.8 - it goes down to 1.1 (head in hands man) - I obviously red out on the way down, then in flips (so I'd be originally right, sigh), then I change my mind when Bell and Morgan are there to have more red on Pak (the original selection), and then Pak win. Great! Isnt gambling fun.

Had a shocker basically but what can you do, no point complaining. What I have done however is withdraw to only leave €250 in the account for the rest of the week, or at least until I feel in better touch, no point forcing it and it'll come back in a few days. Bank size has very little, if any, impact on my betting anyway - the only reason for withdrawing means I cant lose it, which is naturally a good thing during a poor run. I did have 3k in, purely because I havent withdrawn no other reason, the only difference for me between 3k and 300 is looking and thinking "Oh look, theres 3k" and "Oh look, theres 300" its not like I'm gonna put a grand on something mad anyway sure.

I tend to never go over €400, obviously it changes depending on sports, I'd go €400 on cricket, wouldnt go €400 on say darts. I dont have a stop loss either because of that, if things go tits up I can only lose €400 at worse (seriously rarely), instead of having €800 and then a stop loss of €400 awe-red - which the market could fly through anyway, and I might not fancy the odds at that stage too. I dont bet percentage of bank either, which seems a popular topic, never appealed to me really, I just set the stakes on how confident I am about the selection at the time, but obviously with the limit there. I'll never be able to have one big loss that changes things - thats the theory anyway.

Also, I greatly appreciate the feedback on the college decision, I cannot wait to get it over and done with to be honest, get it out of the way and stop thinking. When I said not go back, I meant for this year and not like I would never go back. But I am inching towards heading back in some sort of part-time basis, I've been looking at other courses and theres a diploma in the stock market, which would interest me, they describe it just like gambling/trading anyway, and a diploma in sports journalism, dont really want to be a journo but anything sports related would obviously suit - both are one year part-time courses and so I could take a gap year from my current degree (which needs a thesis, I dont think I'm mentally there really) and come back to it then.

I also remember writing some time ago during the summer that I didnt want to end up missing out on life, sitting here on a Monday afternoon when theres nothing to bet on while everyone else is in college/work - there is that aspect of it which is pretty big, you dont have that problem for the summer.

I'm fully aware that gambling wont last forever you know and thats why I wanna look ahead to what to do, it'd be silly to think I could just win, win, win for the rest of my life. When I get asked then at a job interview in ten years time what have I been doing for the past ten years I can hand them a rake load of degrees (I already have one) and say look, I'm a smart boy, obviously I'll wear a bow tie too, a comb over and have glasses. Yep, thats the future! But I could do the gambling and amass the college courses, then I'd have it both ways - hoping that gambling would be profitable and I'd also be "bettering" myself in life with education (ya cant teach common sense though!), that would be the plan at the moment, but I'd like a challenge (in college) and not just learn this blah blah, something thats interesting - the masters course in business is boring (3% attendance last year, didnt miss one game of the IPL though, ha).

Theres no financial pressure at this stage anyway, if I was to make (and I wont meet this every week) say €100 per week while in college I'd still be miles ahead of where I need to be. It goes without saying my gambling naturally improves when I'm away from college though, I think maybe after 4 years I'd like a part-time year and then go back to normal five days a week next year, just for a change.

As you can probably tell, I've been thinking about this way more than my gambling for the past few days, no wonder I'm losing FFS. 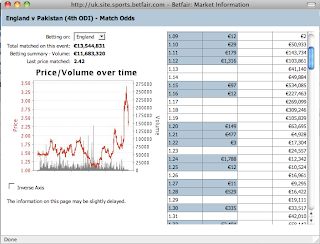