A rare (very rare!) SP pre-off bet for me on this this evening, Aus to win.

No Kerry stars on the Irish team is a huge mistake IMO, but the manager doesnt get on with them apparently so whether it would do more harm than good if they played, I dont know, I think Ire would be a much stronger team with them included anyway.

Aus had a warm up game against Cork Colleges during the week and won 105-12, now Cork Colleges arent the best, but 100+ against any team is a fair achievement IMO. And shows theyre taking the round ball game seriously, they have viewed these games as 'holiday time' in the past, but the coach has played three times and seems very keen on winning so you'd have to assume Aus will be up for it 100%.

Theres an obvious professionals v amateurs argument too, but I think Ire being at home evens that out a bit so level there.

The 1st game is down the country so the pitch will be tighter than Croker, thats an Ire advantage IMO, but if Aus can take to the round ball (and 100+ pts in a game would suggest they have), then maybe the pitch wont be such an disadvantage.

I'm pretty happy backing Aus at odds against anyway, Ire odds on is a shocking price IMO. I've been to Boyles shops this afternoon also, €100ish online is the norm these days, market should be in running on Betfair too - but not on RTE, shocker!

*I'm not the best judge pre-off but sure I'll have a go. 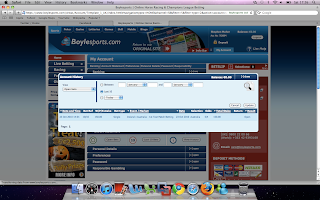