The other night there was only four of them, but now look..! It'd be fantastic if my one would double, just think of the things you could do.. cooking and the windows cleaned at the same time, fantastic.. couldnt be happier.

Anyway, I was in attendance at The Curragh today mug punting, dropped €40ish, but I was enjoying my last day of freedom - back to college tomorrow (sad face!). Although, they couldnt have made the timetable any better if they built the feckin' thing around me, I'm in Mon, Tue, Wed and then off to gamble for the rest - which is perfect, winter Mon-Wed is the boring time. So anyway, starting tomorrow I'm Thur-Sun betting.

What I lost on the horses, I had from the boxing last night, Prizefighter used to be epic trading - it was eight fighters with a chance a year ago, but now it tends to be one or two "star" names (i.e. has-beens, see Audley Harrison example) and the rest bums. Fat fellows last night who havent had a fight since 2008, fellows who have only had four fights their whole career, shite. Stayed away from the two favs, they ended up being the final, but sure Sprott didnt even have to come out of first gear to win the whole thing in the end.

Cant explain how gutted I am that I couldnt lay Wagner for X-Factor, books were odds on or in and around evens, it would have been such a lay! Would be maxed out on liability, early days yet but I think he may become this years Jedward.. hes obviously terrible and cant sing, but he makes me laugh, which goes a huge way to getting votes, it all depends on song choice for him each week. Plus you have all the 'hes so bad we'll vote for him' idea too, but Betfair had "any other" in the market consisting of the four wild cards, had to go that way but not for as much as if it was just Wagner, and also, they had no bottom two (my market normally) either, would have been maxed there too - but they obviously knew something was gonna be different, they could have said something last night at least.

The India v Australia 2nd test draw lay is tempting at 1.5ish, but I cant miss college with registration tomorrow, draw backers are a relentless bunch, I could lay 1.5 it'd bounce to 3.2 and they'd have it back to 1.5 by the time I finish my first lec tomorrow. If theres still action on the 5th day I might skip lecs but otherwise I'm sitting out.

Finish up €110 this week, happy enough given I'd no real strong opinion on anything that was on, thought Ireland v Russia no goal was the best bet.. but I wasnt too far off like, there was only five goals in the end sure, close. Everything else has been just a case of getting on with it. 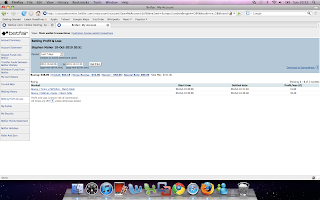