The sad times - after one day theyve changed my timetable so I'm in on Friday for an hour, shocker, the plus side is I have no 9AMs at all now, but I'd have preferred the day off.

The happy times - feck college I've bunked off so far this week to do the test, who needs college anyway..

Hard to believe the draw was backed down to 1.9 this morning after being 3.1ish overnight, that caught me a bit didnt see that coming, but draw backers are relentless as I said no stopping them, hitting 1.3 (and I thought 1.5 was short!) Monday was terribly low but needed balls to hang on for an Aus declaration if it went that far (which was always on the cards being 1-0 down IMO) but in the end it wasnt needed, which helped stress for the price, but I still reckon that when they declare the price is over 1.3, India blocking was my worry at that stage but Sehwag helps knock that idea on the head.

I dont buy the idea that this result means a lot come the Ashes, Aus conditions will be much different, and everyone forgets they had India in all sorts of bother in the 1st test only for VVS to have a hero knock and Sharma to put on 30 too, they were 9 down, add 25 runs and Aus would have won probably, so I'm not running out to back Eng just yet.

I feel guilty for not heading to lecs on the first week, so I'm going this afternoon, and I'll be good from now on.. (until the next match). Getting up at 5AM is hard but bloody hell test cricket is the dogs bollocks for watching sport.

I was in bed last night for the Ireland game to compensate, amazing how unpatriotic you become as a gambler, I dont care unless I have money on it (sort of), people who dont bet have such emotion when the country is playing, and I dont have that emotion at all - you cant really IMO to bet properly. Its weird, I used to be a mad United fan too jumping around when they score, same with Ireland, but dont move a muscle now. I'm either clam or have no soul.. probably no soul.

Test cricket lends itself to that loose feeling of opinion and no emotion though, chop and change a couple of times a day, no bias, no favouritism. Thats probably up there with the biggest flaw of betting shop punters IMO, having a pre-opinion on the jockey rather than the horse and letting it get in the way. Its only taken me 22 years to cop on! Although I started betting when I was 12, and got good (well, sort of good) by 17, so five years then to have no emotion towards teams I like more than others. 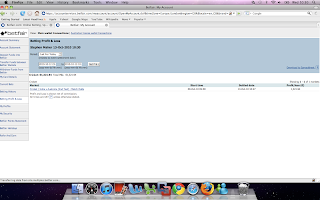