Wagner is no more :(

Thats X Factor done with for another year then. Toyed with the idea of going €260 awe-green this morning but left it, ahhh. Got €100 off the elimination market as a back up because of the double elim but it was worth much more if he stayed in, gutted. (Well not really gutted its only X Factor, but anyway money is money so gutted for that).

The snows back too. Feck. I hate the way everyone bounces around as if theyve never seen it before, and youre sitting there going "Yeah, thats my sporting week buggered then." I was looking forward to Fairyhouse today.

At least with the bad weather, we can look back on events last winter..

Your man nearly became a national celebrity for falling over, it was funny to be fair though, ya cant walk that fast on ice FFS. Incidentally, the news bulletin was how the country had ran out of salt to grit the roads. This year we ran out of money. We'll do something mad again next year but sure arent we a great bunch of lads.

Its been a quiet betting week, hence no posts, I didnt have a bet until yesterday, fiddling around on the rugby and horses out of boredom more than anything, obviously low stakes. Lost €60 on the India game this morning, got a bit carried away laying them when NZ were 8 down (went from 1.01 to 1.3ish before losing), but got a decent enough book on The Ashes 1st test. Only been able to do the first session each day so its been a bit all over the place but I'm delighted to be green considering I had around €350 - €400 red on the draw at one stage, day two I think, the pitch just got flatter as we went on.

Aus attack looks a bit weak atm, especially Johnson, but Eng have only had one go and Aus got near 500 so while everyone is sort of focusing on how toothless Aus look, Eng didnt exactly knock them over easily either, I want another look before commenting. I'd be wary to having biggish red on a draw in any test at any stage given what I've seen so far, if I had to pick a winner I'd say Eng, but with no confidence. I'm not one for chopping and changing a team once one game goes bad, but I really would drop Johnson and bring in Bollinger.

Remember to follow @theashes on Twitter for all the latest updates.. (OK so if you havent clicked on that, its a teenage girl from America with the username TheAshes and she now has 2,500 followers tweeting to her about cricket which she hates, maybe its the late nights and different sleeping patterns but I must have chuckled away for about an hour last night at her SEETHING, tweeting the same message over and over seething is feckin' priceless).

Remember the Father Ted episode when they were complaining about the nude film and had the signs.. "Down with this sort of thing, careful now." Some fellow had it at the protest at the GPO on Saturday, only in Ireland..! 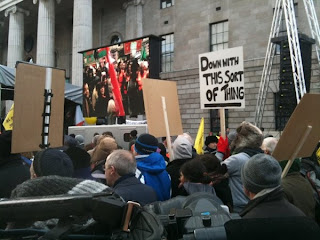 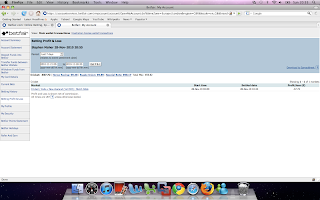