I'll not comment and let things speak for themselves..

Pakistan wicketkeeper Zulqarnain Haider is reported to be at Dubai airport and preparing to fly to the United Kingdom. Sources in the PCB confirmed his presence at the airport a couple of hours after saying he was missing from the team currently playing the deciding ODI against South Africa at the Dubai International Cricket Stadium.

The PCB had begun an inquiry into the matter and informed the ICC's Anti-Corruption and Security Unit as well as local security officials of Haider's disappearance.

"He is missing and we found this out in the morning when getting ready to come to the stadium," Nadeem Sarwar, PCB's general manager of media, told ESPNcricinfo. "He did not say anything to the team management about this at all. We have initiated inquiries into the matter."

A cryptic message left as a status update on the player's Facebook page said: "leaving pakistan cricket because get bad msg fr 1 man fr lose the match in last game." The last match that his Facebook status seems to refer to is the fourth ODI of the series, another closely-fought thriller, in which Haider's unbeaten 19 took Pakistan to victory with one wicket and one ball to spare.

Raza Haider, Zulqarnain's brother, said the wicketkeeper had reportedly received threats. "I spoke to Zulqarnain after the fourth ODI and he told me he had received some kind of threats after that game, but he gave no details," Raza said.

A TV reporter for Geo, a leading Pakistani news channel, said that he had received a text message from Haider earlier on Monday in which the player asked for security for his family and indicated that he might fly to the UK. The channel reported one of its correspondents receiving a text message from Haider asking for security for his family in Lahore.

Whether its to do with winning the last game, or 'trying' to win this game, thats sort of not clear yet because this game is the "last game" the series, or its the last game they played. This game so far has been virtually a 1.01 train bar the two wickets, with Saffers 201/2 after 33 overs, and it has not looked like a series decider at all at 2-2. Maybe Pak will chase down a big score though, who knows.. 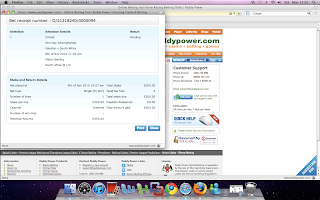 Uh oh! Saffers lose three wickets in 14 balls with a run out included.. I've greened, we'll have to wait until Pak bat to know I suppose, wont touch the book now, crossing between Books and Betfair not great for managing positions. Zero Pak (minus comm), €39 Saffers.

Pak 66/0 after 10 in responses to 318, happy to have gotten out now in terms in stress, I think theyre trying now, but still think Saffers will pull it out in the end, no change to the book for the day anyway.