Back Down To Earth

Well it was always going to be a struggle after England v India finished, but going straight from a summer of Tests and ODIs into the craziness of the Champions League T20 (basically spin off of the IPL really) has been fairly difficult to start with. Its starting to pick up now over the weekend but I was all over the place in the earlier games, I suppose its a bit like going from trading 3M chases to trading 5F sprints.

I've been stitched right up by the Sky planner for live cricket too, I've been getting nagged to paint the house since June, but managed to push it back to now(ish), asking for the England v India to finish which made sense all things considered. So, I look at the Sky planner, it says no cricket until the 13th of October, I think GREAT, I get to look good now devoting three weeks. Completely forgot about the Champions League on Eurosport, and now I'm committed to the redecorating theres no stopping it once in full flow, head in hands.. 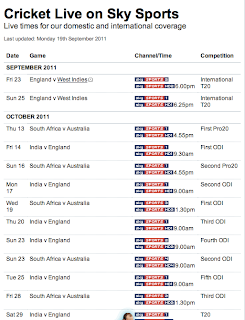 Hopefully its not too much of a distraction because theres games every day in the CL, head in hands again, what have I got myself into..

I think my desk and TV are being moved, added to the room painted, so I'm planning to keep trades under €200ish liability or thereabouts until were finished. I still recall the last time the house was all up in a heap when the cat was sick for the two weeks, I lost €800+ which was one of my worst runs ever - I'm keen not to do anything daft, its easy to lose once you take your eye off the ball, and instead of checking Betfair I'm checking wall colour charts.. (again with the head in hands there, yep).

Anyway, not much good press for Betfair this week, I know they dont get any good press really these days, but these two stories arent nice to hear, especially them taking £52k out from an account - and the second one, noting that their user base has dropped 19%.

Betfair 'removed £52,000 from customer's account'
A Betfair punter is threatening legal action against the betting exchange after a dispute over more than £52,000 that he claims has been removed from his account.

Sandip Sayaniya, who aired his grievance outside the company's annual meeting on Thursday, claimed he was not the only customer involved in a row over "premium charges".

Betfair initially deducted 20pc of gross profits from successful punters gambling in more than 250 betting markets. In July, such charges were raised to 40pc to 60pc for customers who have won more than £250,000.

Mr Sayaniya alleges he has bet in less than 250 markets and made a £24,000 profit. However, he claims that on September 5 his account was suspended "under investigation of Premium Charge avoidance". On September 20 he received an email from Betfair's "pricing team" stating his account shared a similar betting strategy with four others, all of which would be taken into consideration for the charges. Betfair deducted all £52,352.85 in his account.

Mr Sayaniya, who plans to start legal action by next Thursday if the money is not repaid, said: "I do not recognise any of the other four accounts named by Betfair, and have never operated any account other than my own."

A Betfair spokesman said: "We thoroughly investigated this matter and we determined that the customer was evading payment of the required fees." He added that Betfair's legal department was happy to "discuss it with him further".

The news that Betfair founder and chairman Edward Wray could be the next senior manager to leave the embattled online gambling firm, will be met with raised eyebrows among investors.

The FTSE 250 business, which allows gamblers to bet against each other rather than against a traditional bookmaker, is already looking for a new chief executive after David Yu said in June he would move on when a successor is found.

But at yesterday’s annual meeting Wray, a former JP Morgan trader who co-founded the business ten years ago, said the firm had ‘started the search for a deputy chairman. The intention is for this person to take over from me as chairman at an appropriate time in the future’. This follows a spate of other senior executives who have also left the business in recent months.

And while all this has gone on investors have seen Betfair’s stock almost halve since it floated last October at £13, with a value of £1.3billion. Betfair yesterday closed down 60p at 723p, valuing it at £839million. The business has faced a number of disappointments and delays as it has tried to push its services into a host of European countries, such as Germany, Denmark, Italy and Spain.

And in August the UK government revealed online gaming companies based offshore would need a domestic licence to take bets from British customers. Betfair moved its headquarters to Gibraltar in March to save around £20million a year.

These constraints on growth are beginning to affect the business, at the start of this month the firm turned in first-quarter core sales down 7pc to £80.8million, with the number of active customers down 19 per cent to 381,000.

For Betfair the wider economic climate is tough, and the regulatory issues it faces are protracted. Investors will want to see a settled management quickly in place, who can then set about getting the share price moving in the right direction again.

One small point I picked up on too - I was always under the impression there was more users than 381,000.. not because I had any facts to back it up or anything, just because it always feels "busy" and you cant make mistakes at all without being cut at the throat. Maybe the 381,000 are just addicted gamblers like me though..! Sure were a great bunch of lads. 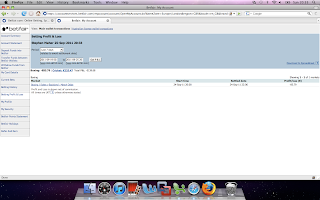