I'll try keep this short, trying to get on with the painting - The Arc this weekend was a great excuse not to start! Hopefully the whole redecoration business is finished by the 13th when international cricket is back.

Anyway, Paris was fantastic yesterday in the sun, I've lost interest in racing this year to the point where I dont even check to see whos running these days but I think we'll always go to The Arc every year, great value for the racing and great course - I think we'll always go to Epsom too, but only because it always falls on my birthday weekend, my days at Cheltenham and Royal Ascot are over I reckon.

I thought St Nic ran an absolute blinder, my heart hasnt pumped like it did turning in for a while, I thought he was going to win for a while. Then at the end I was thinking just hold on for the place but they always finish fast in France and sure he just lost out finishing 5th, still a cracking run, and while not good enough to collect cant help but still be proud of him.

I'm going to defend Heffernan on So You Think - not because I think he did well, but because IMO he only did what he was told to do, if I was blaming someone I'd blame APOB miles before blaming Heffernan. Given the wide draw he had limited options though, bounce out fast, cut across and end up nearly making the running or come out and drop in behind. He was obviously told to drop in IMO, and sure once thats done you'll always need a dream run through and it didnt work out.

Its a real catch 22 situation when you think about it from the jockeys perspective, it must be intimidating having Coolmore dictate to you what to do - so you go out there and if you do something that isnt what they told you and lose, you know you'll get hung, drawn and quartered (Spencer didnt last long). Then on the other hand, you do what they tell you, and lose - like Ryan Moore at Royal Ascot on SYT, APOB takes the blame and the jockey was only "following orders." Its easy to think about it like a punter, but the jockey is only basically doing what hes told by his employer just like any other job. In an ideal world, you'd let the horse bounce out and then let the jock decide what pace and position to take, but thats never going to happen with APOB.

But anyway, thankfully my days of going over a race, analysing and studying it are long gone, huzzah! Its only when you leave it you realise how much guess work is involved compared to in-running trading on other sports.

I said last week, with the house up in a heap I'd keep things under €200ish - that lasted three days, I cracked Thursday..

I was in the process of laying off when a wicket went down, but instead topped up, things change quickly..

Very disappointed with the rain on Friday, I had my best book of the week, ironic thing being England where in the middle of a heatwave, and its raining in India..

I always like backing the chasing team at Bangalore, its one of the best chasing grounds in the world IMO - its where Ireland chased against England at the WC too, hitting sixes always looks so effortless.

Was a bit daft on the boxing but only lost 12 quid thankfully, forgot I wouldnt be able to access Betfair in France so left zero on Rees and red on the unknown guy (to me anyway), it finished a draw.. lucky it wasnt a couple of hundred. Very awkward result for Rees on his first defense.

Also a small word on X Factor, the live shows start Saturday, the market has clocked the fact no person should be 300s, like Wagner last year, but its hard to find an obvious act that will be this years Jedward/Wagner. Everyone will be looking for the winner but theres more money in getting the fellow who goes from 100+ to single figures, sadly the market knows this now and doesnt have anyone 100+.. I think if there is to be a cult following of someone not good at singing it'll come from Louis four, Louis is obviously very shrewd, but I think atm the person he picked for it (Goldie Cheung) has pulled out - maybe she knew! It could be Johnny Robinson, whos 70 on Betfair, but realistically how many weeks does he have to stay in to get a good trade from 70s, as I said the market has clocked on a fair bit.

Last year Betfair didnt have a bottom two or three market either every week (and when they did they voided it) which ruined things a fair bit, the funny shit one will be odds on in that so it was always a great lay for the first few weeks. Point to remember too - singers towards the front early on always do badly, and its not an actual singing contest until the last five or six, as Louis would say "youve got likability" its whoever people like, Wagner proved that last year and remember when Simon saved Jedward (against a favourite at the time too) but apparently he "hated" them, votes and newspaper headlines = $$$$. 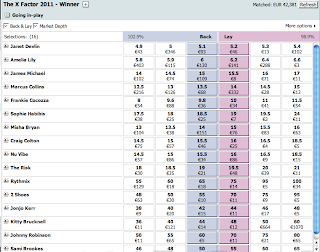 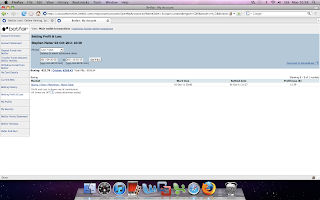