Well, its been a good week considering the body pain from falling. The blog name obviously lends itself to the idea I was bound to fall and injure myself at some stage! I have to stop laughing at other people falling too, this is what happens when youve been brought up watching Youve Been Framed. Dont think I've ever mentioned this but I got the name for the blog from the Apres Match piss take of the Carlsberg Gaffer Falls ad, and I thought Gambler, dont take things seriously either, Gambler Falls..

Anyway, felt a bit robbed on the boxing last night to be honest, I had it very close, everybody on my Twitter timeline had it close, and Dave Parris comes up with a 5 round verdict, you can always nearly tell when you search and see even non-gamblers think it was a rubbish call.. 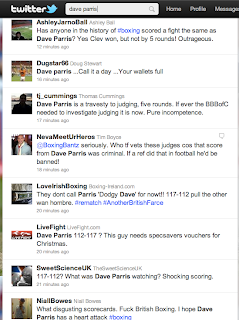 As I said last night, if it was 1 or 2 rounds you know you can understand as usual because it was close, but 117-112 is just a joke. What can you do though, the worst thing about it was the market knew too - how Bellew was staying between 5 and 6 while the rounds seemed so close I dont know. Generally I dont like leaving things on Betfair in the hands of other people, because youre always faced with total gobshitery - but what can you do with the odds.

The cricket has gone better, except for England going from 111/2 to 174AO, that was a near enough straight line killer. 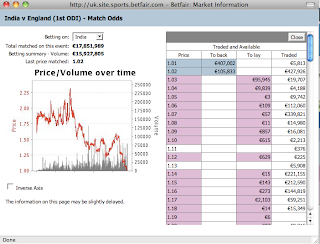 Funny thing being away from home, if that happened in England - they would have just shrugged the first wicket off and kept going but instead collapse. I got out of it, but only because I had a handy position when it happened, I dont mind finishing with a tenner because I wasnt thinking about taking the €300ish green at the time anyway, if they went at 6.5 for 10 that left 137 off 20 with 8 wickets in hand which seemed very do-able, thats what I was working off in Excel at the time but sure things change quickly, as ever.

I want to say something about the new whip rule this week, but I dont know where to start.. its a shambles altogether. As a racing man, or ex-racing man probably better put now, I cant understand why the whip is deemed cruel - I'm of the opinion that every "racing man/woman" can look at a race and SEE for themselves if the jockey has been overly excessive in his/her use of the whip, when you watch enough races you easily spot these things, IMO Jamie Spencer in the last few hundred yards on Cape Blanco was overly harsh..

Now obviously there are different rules in the USA from the UK - but no one likes to see that, when the horse had already won, but the point is you very rarely see things like that happen in the UK anyway, the ironic thing is racehorses are probably the best looked after animals on the earth. I would argue too (just for nuisance sake) that if the whip is deemed cruel, well then surely making the horses jump fences and hurdles is cruel - I've never seen a horse have to be put down from the whip, but I have seen them put down from falling. Where do you stop? Making them run fast is cruel, and on, and on, and on..

The problem with trying to please "the man down in Tesco" (as Matt Chapman put it this week), is that the man down in Tesco hasnt got the first fucking clue about racing. Changing the rules to appease these people is nonsense IMO, but then again what do you expect from the BHA. It all started to go downhill when they watered down the midweek racing to make it so weak, the prizemoney doesnt help then because of such volume of racing at low levels, and then you have courses putting on bands after racing to try and get people in the gates - clearly missing the point and not attracting people for just the pure racing - but when theyre given five handicaps and two claimers what can they do? The days of horse racing being the only available betting vehicle are long gone so you wont attract the masses like say soccer does, its a minority sport - so cater for that and please the people who are interested in it, dont ruin the game to please a few outsiders, run the game to please the minority - the loyal core supporters.

When the man down in Tesco who does one bet a year on the Grand National says the whip is cruel, he should be looked square in the eyes and told he doesnt know anything about the sport and to go fuck himself. FACT. Now you could do it more politely but they need to be told to stay out of other peoples business.

I actually care about this a lot because I'm faced every day coming from Ireland with "cricket is so boring" .. "have you ever watched a game" .. "No.." .. "Well then WTF do you know about it." Same thing. Racing people can be the only ones to judge what is and what isnt deemed cruel, not outsiders. The man in Tesco can keep his bollocks opinions in Tesco thanks, we'll go racing. 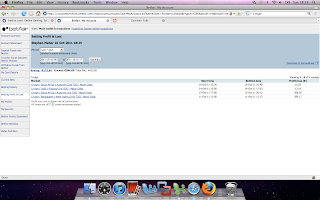