Its been a good week. Mostly due to the weather over in South Africa, everyone was watching the clean up operation via an online stream with no comms so it was hard enough to see exactly what was going on, but I managed to clock they were turning the covers over (or something to that effect) while taking them off - which meant they had to go forwards then backwards, which looked like they were putting them back on, but they werent they were just turning them over. There were four covers, they did it with each one, and every time they looked as if they were going back on the market was swinging from 1.7ish one side to 1.6ish the other, it was great..!

The whip debate continues to rumble on. Ruby Walsh got banned for a fantastic ride yesterday - but I think its "good" that the A-listers are getting banned, and I use the word "good" in the sense that its only when they get banned that something might get done about it, example being the jockeys didnt want to go out for the following race and only did when the trainers were called to the stewards room (apparently, or something like that). You know, with the greatest respect, if a nobody gets banned no one really cares, but when you get the A-listers start getting banned you start to get a bit of support and more of the smaller jockeys look to them to lead the way, so hopefully it might get sorted out soon. Although I wouldnt be holding my breath with the BHA.

Couple of stories to note this week, one being Betfair might have plans to turn into fixed-odds bookmaker (aside to the exchange obviously), I dont really like the idea - as everyone knows with books its all highly likely to end up with closed accounts etc and going down that general road. I dont put any pass on the figures given by Bloomberg - but its the idea thats the worrying bit. We shall see sure.

In April, Betfair is planning to offer fixed-odds betting alongside its exchange bets to increase choice, a step that could help increase its dominance in commercial sports betting, analyst Ivor Jones said in a note to investors.

The new system could let Betfair tap into the advantages offered by fixed-odds betting, such as greater selection, earlier bets and more multiple wagers, Jones said. Betfair’s betting exchanges allow customers to bet against each other, rather than against the house, as at traditional bookmakers such as William Hill Plc (WMH) and Ladbrokes Plc. (LAD)

“If Betfair came to dominate fixed odds sports betting, in the same way it currently dominates overall sports betting, then it has the potential to more than double group profits,” Jones wrote, adding that the calculations are “highly speculative.’ He has a “buy” recommendation on Betfair.

In June, Betfair said it’s developing an “integrated” sports betting product that will allow it to offer more bets during games and other wagers.

And another story about our good friend Mario Balotelli - he set his house on fire this week by letting off fireworks, wait for it, inside his bathroom.

Mario Balotelli's remarkable capacity for self-inflicted problems resurfaced on the eve of the Manchester derby when he had to escape from his burning house after a fire caused by letting off fireworks in the bathroom in the early hours of Saturday morning.

Two fire crews using breathing apparatus put out the flames after being called to Balotelli's house just before 1am on Saturday to deal with what has been described as "a substantial fire" on the first floor. The property, in Mottram St Andrew, Cheshire, sustained serious fire and smoke damage, and the police were also called – in part to ensure Balotelli did not go back into the house. The striker is said to have been reluctant to leave his belongings and, at one point, to have run back inside to recover a quantity of money and a suitcase.

I'm looking forward to next week, will be hopefully back to normal by the weekend in regards to the arm with a visit to the doctor this week - I miss golf and the gym terribly. Healthy body, healthy mind and all that - its important to have a big list of things to do away from gambling to relax and get away from it, that makes it far more easier to forget what happened yesterday, be it good or bad, and start every day blank, the best thing about gambling is theres always a tomorrow to look forward to, because sporting events and opportunities are never ending! 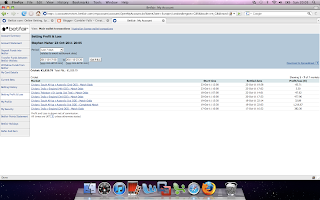