I'll try keep this a little short because I have a touch of the flu. Quiet enough week on the P&L because I've been concentrating on the Saffer v Aus 2nd test, and currently have this going into tomorrow..

Its been good..! All three outcomes have traded odds on, and all three have traded 9+ I think too. Erm, tomorrow is tough to price up - I think the draw is short but we have lost the last session a couple of times this week and if play is slow tomorrow and they need 10 overs after tea that would be a worry, I'd have Aus shorter and Saffers longer but theres not a huge difference there - I wouldnt disagree strongly with anyone for saying either are a bet tbh.

Aus are going at 3.8 per over atm which would lead you to think they need another 45(ish) overs to win, which is why the draw, albeit short, is understandable enough - bad light is going to be a huge factor so much depends on the time it arrives really, which is anyones guess, then lose an early wicket and they might slow down a little and need more overs to chase it.

I'd probably favour Aus if given a €500 free bet but obviously dont want an overnight position and waiting for conditions in the morning, I trust Ponting, Clarke and Hussey - wouldnt want Haddin walking in with them needing anything more than 50 though. An added factor with me too, with no real gambling logic, is I've traded it from bed yesterday and today feeling shite with man flu, I've got to +€2.6k and dont want to make a complete bollocks of it now, it would break my heart! Thats probably the main reason why I havent added €555 to the results and gone small red on the draw.

Anyway that'll be next weeks P&L - this week is just a very quiet €32.72.. I did have a max liability lay on Sri Lanka at 1.4, and the market flipped twice, but muggins here only made €30. My own fault solely rather than events being out of my hands, and the second game was during the test so that wasnt given any real focus. 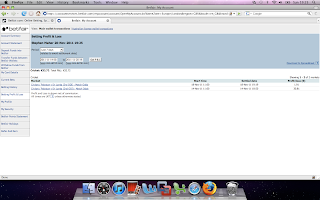