Well, it all happened this week.. I have to say I enjoyed the drama between Chisora, Haye and the Klitschkos last night, I know it was unsavory but I thought it was great! For some reason I'm OK with things like that happening in Boxing - if it was football or rugby I'd be thinking what a pair of twats - but they spend their lives fighting and well things like that are always going to happen now and again arent they, everyone loved Tyson and sure he was a major nutter, I think it just adds a bit of drama around the place and gets us away from the usual shite in the news. I've said this defending Amir Khan too, the problem is no one likes arrogance, but boxers are programmed to think they are better than everybody, so it just comes with the sport and thats basically it, it comes with the sport. Theyre arrogant, and everyone wants them to get knocked out but imagine how crap it'd be before a big Las Vegas fight if one of them in the pre-fight interview said "Ah yeah, I'll get beaten up and knocked out, sure I'm shite, I'm useless and a loser.." Thats not going to happen is it, no.

As for their back pockets, Chisora was relatively unknown outside the UK boxing fans before yesterday - he is known now, all his antics, he knew what he was doing sure. Haye was "retired" and needed to do something to get back in the limelight (hence even turning up to the fight) - hes major news again. I can see lots of people saying "its bad for boxing" "theyre behaving terribly" yadda yadda yadda, but they'll be the exact same ones buying the PPVs though when theres fights between the four of them involved last night, they'll talk about and they'll have an opinion on it afterwards. If I remember correctly Shane Mosley had a shouting match with Floyd Mayweather after a fight, next fight? Mosley v Mayweather. Last night was a fantastic sell for PPV if ever there was one. And anyway its Boxing, its much MUCH better when they hate each other.

Anyway, onto the cricket. Well, Monday didnt start good, I said Sunday I was feeling unwell so feeling like shite is never good for trading but I managed to go from +€290 on England back to zero, annoying to not even get €100 out of it, I laid Eng heavily after a wicket at 1.29 (which was such a big over reaction IMO) and it bounced back to 1.4ish so it wasnt too bad of a move but then another wicket at just the wrong time and it was soon 1.08.. I accept the 1.29 lay but really should have finished a bit better off than €3 after being +€290 even with things going tits up because I had so much leverage in the first place, stomach feeling crap didnt help the mood, it was just one of those when you sit there after thinking "Why am I such a gobshite.."

Wednesday was better, I went equal when I had the chance around evens the pair (rare for me!) main reason for that was the market was in 'swinging between the 1.7s' mode and even though flip flops always sound good for trading when they happen so quickly and change a few times, it only takes one bad move to ruin everything you know, so I was happy to sit out for most of that, it turned out it was more England going from 1.5 to 2.1 rather than 1.7 to 1.7 after Pak lost wickets but it was just one of those markets that was loaded with quick danger. Old me would be involved in some shape or form but new me tries not to get hung, drawn and quartered now - even though it just happened on Monday, ha!

And yesterday was relatively easy compared to the rest of the week, I said on Twitter Eng at 1.7 at the start of the chase seemed very high and it was a 1.01 train from there.. which always helps! First time in a while I traded first innings too laying Pak at odds on, they just seemed in swing at everything mode so there was always a chance of crumbling when you have quality bowling.

I had my first horse bet today too in ages at Navan today, not on Betfair though because someone had €2k up before I woke up at 3.7 when you could get 3.75 minus commission cash. Berties Dream, I think hes worth a follow, IMO the ride he got today was suicidal kicking on that far out in Navan will only end one way really, I thought the horse did fantastically well to still even have a chance going to the last. You might remember him he would the Albert Bartlett in 2010 before turning to pot but he seemed to find his old form last time out, and was even better today IMO but hopefully that race doesnt leave a mark, I felt sorry for him going that far out and trying to get up that hill, maybe he might be a Irish Grand National horse in time.. and when I say that I mean it in the sense that he'll win it at 25/1 and I wont have backed him. 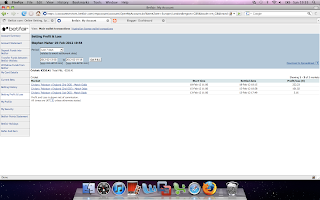 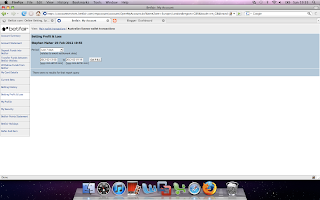