One of the most frustrating weeks I've ever had on Betfair this week. The IPL leaves your head spinning at the best of times, but I really cant get anything going on it at all so far. I was saying on twitter earlier in the week that I couldnt get a strong hold/opinion on any of the games so far, but even today when I was happy to have a fairly strong opinion I was miles off, one of those weeks!

So far theyve been very one sided games though, and the market is hitting sub 1.2s pretty early on, if it hasnt reached 1.2s near to the end of the 1st innings, its going quickly in the 2nd innings - but there has been loads of early wickets. From Monday on I wont be getting involved at the break at all - and just judge things on how the chase is going rather than forming it during the break.

I've also withdrawn a fair few quid from the account too so I cant have any big liabilities, I know theres loads of opinions on bank size but it never really bothered me you know, I've always thought you only really need what your using at the time in the market rather than be sat there looking at €10,000.. when theres no chance of putting that in the market, I've always thought it only opens the door to a miss click really, but each to their own of course. Anyway, I usually have around about €1k, I'm going into tomorrow with €300 - purely to keep IPL trades a bit lower than usual, confidence is pretty low after that battering of a week. I think I did really well to only be down only €80 really.

I was heavy on England too in the Test, without getting up at 5-30AM so I cant really complain, but I traded out of that (was carrying red) just before they went odds against towards the end of day four, then a few minutes later Swanny took two wickets in an over and they won easily on day five. Happy they won to keep the number 1 spot for the summer, not happy with my timing, or patience - patience is (IMO) number one key for test cricket trading.

That probably sums up this week though, bad timing and bad patience, but sure next week we'll have another go and thats what its all about. Just have to relax a bit, losing never bothered me at all once I know I've done the best I could - just need to find that bit of patience again for the IPL - I forgot how crazy it is. 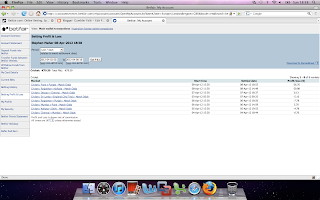