Finally took the plunge and downloaded the new Firefox, so its a bit better writing posts now its compatible with the new blogger layout - it also means a different look on the Betfair screen shots but its not overly different. Although one problem I had this week was clicking that bloody "try Betfair BETA" link placed RIGHT over the refresh button, annoying when you click on it during an in-play market..! I use Gruss for trading but I do like to have the main site open at the same time, probably a case of habit.

Anyway, a better week this week and steadily getting better with the IPL, it gave us a reminder why you dont lay big prices this week - 400 matched down to 3ish.. that would have been scary for the layers. 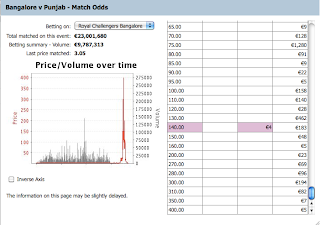 The markets have been getting better for me too, my stakes have been a lot smaller than they would be normally, but because I'm getting involved later than usual, I dont have the time to turn over as much as I would usually do. Its not too bad though and I've been aiming for €40 - €50 a game which seems the best way for me to go, and keep liability a bit lower than usual - just because its so bloody mad.

I had been looking forward to the start of the English season but I made a right bollocks of that on Friday night, shouldnt have even got involved after it was such a high score first innings, discipline slip there. But it was a good week over all and happy enough with the plays. I managed to fluke the 1000G winner yesterday too, although it was my Girlfriends idea because Homecoming Queen won the day we were in Leopardstown so thats where I got it from - dont mind taking the credit though you know, ha!

I think with the trouble at the start, if you ran the race again you'd probably get a different result but sure its hard to know, she was quite impressive. I thought she'd make the running for Maybe and then because she was so tough in Leopardstown stay on for a place, wasnt expecting her to have it wrapped up by 3F out. Nice to see Camelot win the 2000G too, hopefully he goes onto The Derby now and we have a few big clashes over the season with whoever comes out from the pack, I wonder will Frankel possibly take him on at some stage, hopefully. 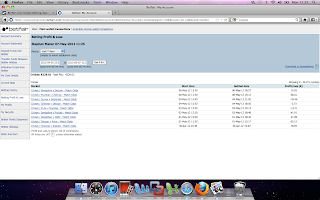